We had so much fun on Noah's birthday downtown that we decided to do it again for mine. Downtown LA always seemed like a place you never went unless you worked there. But there is a budding society and it makes it seem like we are visiting another city. A vacation 20 minutes (or an hour and a half) away (depending on traffic, of course!). 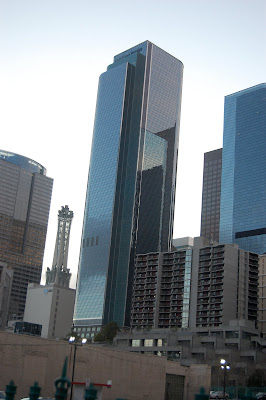 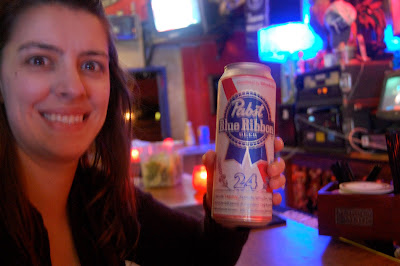 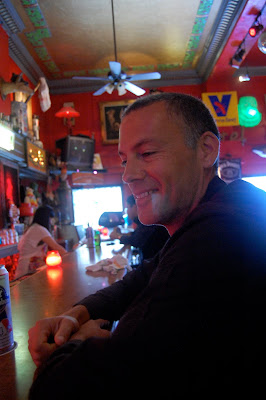 Next, we walked a couple of blocks away to a a wine bar called The Must. They served tator tots with cheddar cheese sauce. And really strong Raaaaaaayyyy Neeeaaaarrrrrrr Beeeeaaaarrrrr! 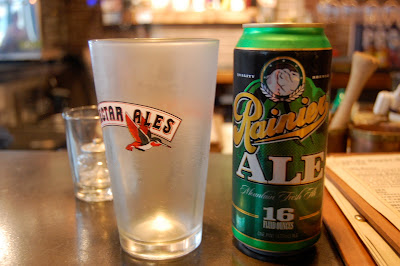 Noah drank an Old Milwaukee and we snacked on a warm, soft pretzel with a fabulous mustard. 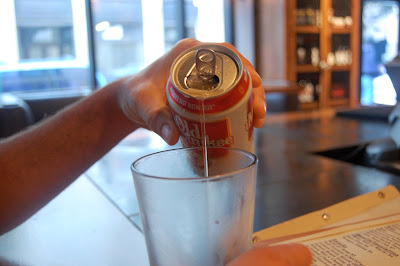 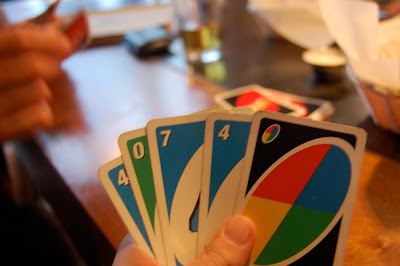 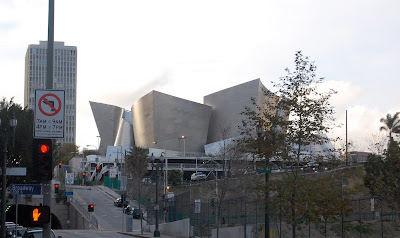 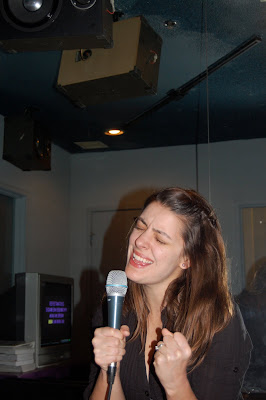 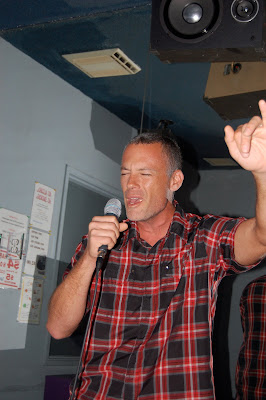 They had a bunch of board games and card games for public use so we channeled our Hawaii vacation and played some Uno. (Of course I thought of you Lou!) 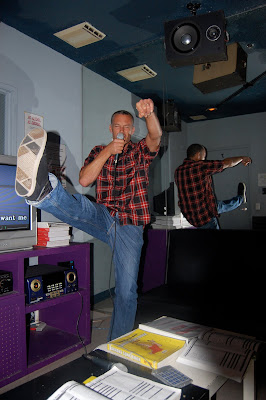 Next we walked a couple of blocks to The Redwood Bar and Grill (a pirate bar, Arrghh!). This was the view outside the door...

Lately, I've really been into Journey. More precisely, I've been OBSESSED with Journey, especially with Steve Perry. So on my bday I wanted to sing "Journeyokie". We snuck in a pint of Jim Beam and sung our hearts out! 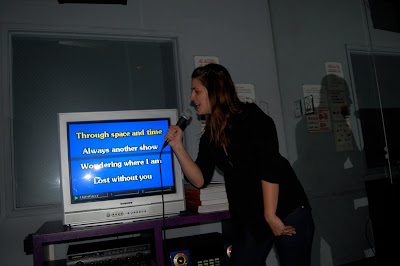 Thoroughly toasted and ready for some good food, we walked/bussed to Church and State, a fairly new place on the outskirts of downtown. Downtown is a sketchy place to walk around: one minute you are in a gentrified neighborhood, the next skid row.. Yikes! But we made it okay and shared a prix fixe menu for $39. 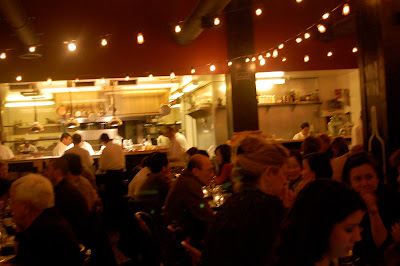 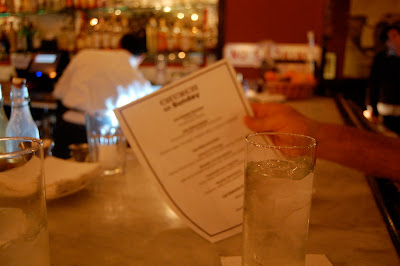 We took the 720 home, straight down Wilshire. Barely had to wait, stopped at the HMS Bounty mid-wilshire, halfway through the ride. Got bought a drink by a regular, chatted it up with an Asian Jew and a gay guy. Fun, fun... 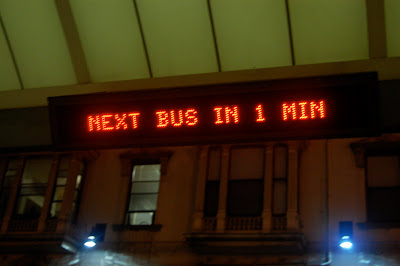 For Noah's 36th birthday, I wanted to go to take him to the French countryside, tour off the beaten path bistros in a convertible and spend nights in quaint little bed and breakfasts. But we couldn't afford that. Hawaii? New York? Palm Springs, for gods sake? Nope, our budget would not stretch that far. So I decided to take a small vacation in our own city. It's easy to do in LA, a place where every country is represented in some neighborhood. After some thought I thought it would be fun to discover the essence of old Hollywood, the LA of the 30's, 40's and 50's. Oh, and I wanted to booze to be included somehow. So I researched lounges that have been open since the 30's. Here's what we found:

I thought it would be fun to forget about driving and trying to find parking. LA's public transportation is atrocious but we found a way to make it work. After buying $5 day passes for the metro (good on buses and the rail) we hopped on the Big Blue Bus #10 to downtown. 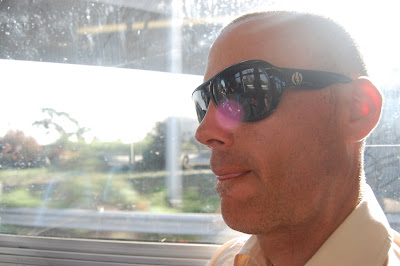 It took us about 25 minutes to get downtown. The ride was comical, the personalities of the bus driver and other riders kept us entertained. And in true LA commute fashion, the bus got cut off, had to slam on the brakes, and we came together as a small bus riding community by flipping of the offending driver. What fun! 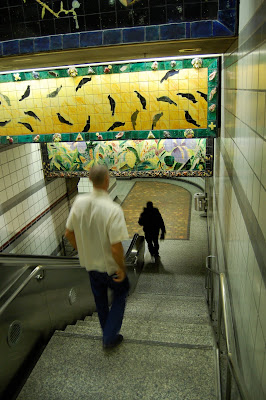 We got off downtown near a rail connection and did our first underground foray of Los Angeles. The cleanest and most beautiful of subway systems! I'm shocked more people don't take advantage of such a convenient way to get around the city. 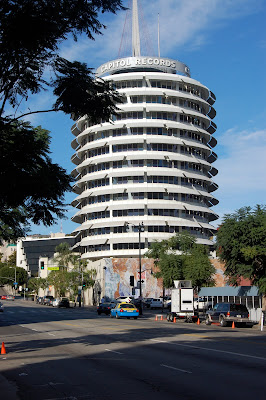 Our first stop was in Hollywood. Naturally, something was being filmed at a corner diner and we had to fight our way through lights, electric cables, crew, and heavily perfumed and make-up'd actresses. Pretty cool to see the Capitol Records building. 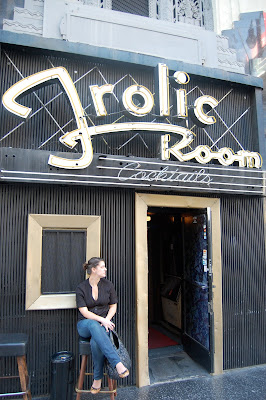 Our first stop, The Frolic Room, conveniently located right across the street from our rail stop. We meandered along the star studded sidewalk and made our way into the tiny, dark bar. There was one other patron and the ageless, petite woman behind the bar was making him some Jiffypop on a strange, undulating hot plate. She was delighted when we told her what we were doing and gave us ideas of other bars to visit. The Frolic Room was opened in the 30's and was a hang out of the "Black Dahlia" and Charles Bukowski. 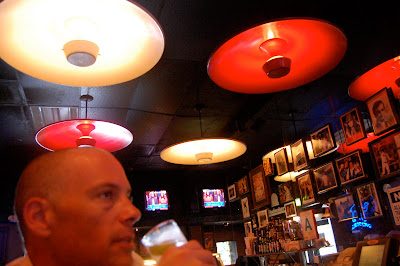 Inside the bar with the birthday boy. I love taking low light photos. And of course there are always signed head shots and photos of the owners with various celebs prominently displayed. 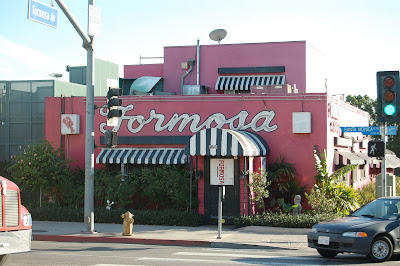 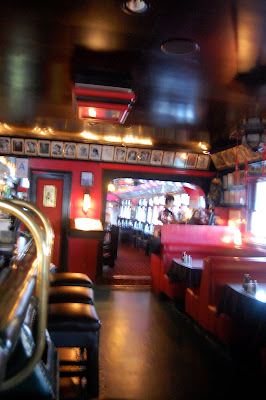 A quick bus ride to the next stop: The Formosa cafe. It was opened in 1934, the back half is made out of a trolley car, and legend has it that Frank Sinatra spent many nights here pining over Ava Gardner.
A view of the trolley car (sorry about the blur!) The bartender was really friendly and knowledgeable. The cafe is around the corner from Warner Brother's studios so all sorts of industry types have spent lots of time here. 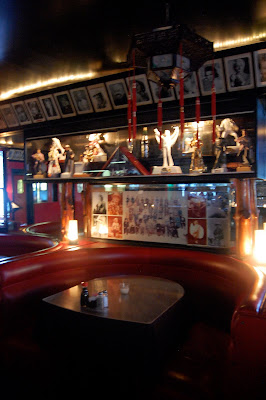 This was Elvis Presley's favorite booth. He donated several Elvis-likeness liquor bottles which are displayed in the case above. An Elvis shrine! 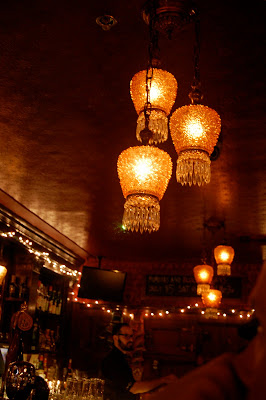 We took the rail back downtown and our last stop (after having a great dinner at a new restaurant in Japantown called the Lazy Ox Canteen) was Cole's. It boasts having invented the French Dip. 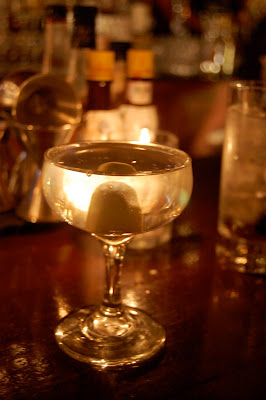 We ordered Bombay Sapphire martini's and the bartender wasn't having it. He made us martini's made with an old school English gin. A fabulous end to a great birthday! A relaxing bus ride home....
Posted by LA RN at 5:41 PM 3 comments: